Why you DON’T have to niche (but what you do need to do instead). 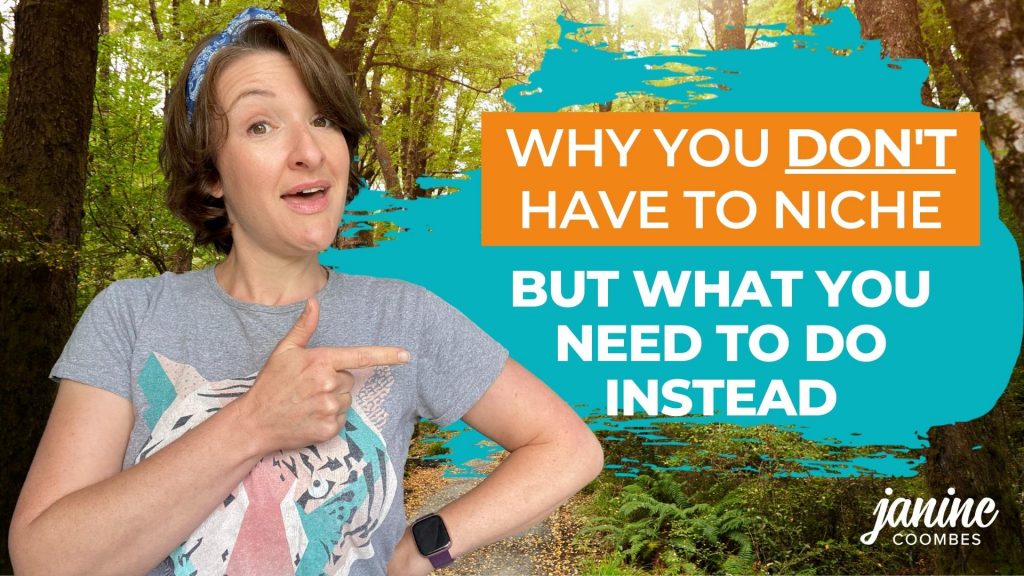 You might have got the message that all businesses must niche.

“The riches are in the niches!”

“You MUST niche otherwise you won’t stand out against your competitors!”

“You haven’t niched? Are you a total idiot or something??”

That sort of thing. It makes you feel a bit crap, doesn’t it.

But lo, what light through yonder window breaks? It’s Janine with her common sense!

True niching is a high-risk strategy and it’s not for the faint hearted.

It’s most definitely NOT a must-do.

BUT please read the rest of this blog to find out what you do absolutely need to do if you’re a service-based business who wants to succeed in this funny old online world.

If you’re just starting out in business, trying to niche straight off the bat will probably feel frustrating and uncomfortable- for good reason.

From business owners venting their frustrations on social media to annoyed clients telling me ‘I refuse to niche’, people rail against the concept of niching because they feel they’re being pressured into drastically and arbitrarily cutting down their options.

So what’s going wrong? Why have people got this idea that we all MUST niche otherwise we’re missing out?

Niching is being confused with defining your target market

Defining your target market is the action of deciding who you think will buy your stuff.

Or, in my line of work, getting clear on who you want to zone in on and therefore what offers you should create that will appeal to them. (It’s easier to sell stuff this way round. Otherwise you might get into ‘polishing a turd’ territory.)

The more sharply you define your target market, the easier it’ll be to create something that they want and to call to them in your marketing. Decisions about content creation and pricing become easier as you get to know your target market and so on.

Imagine your whole target market is like a dartboard.

Defining your target market is deciding which wall the dartboard is on, how big it is, how far away you’re standing from it etc.

This step is an absolute MUST in your planning process. Otherwise, how will you know where to throw your darts?

Businesses who find that their target market has become unmanageably broad can then segment their audience and create services or products that suit each one. 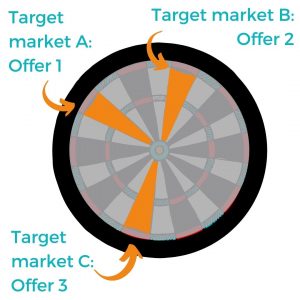 For instance, when I used to work for EE (UK based Telecoms company) we’d regularly analyse our customer base to work out the different types of mobile phone user. Age, gender and usage patterns all went in the mix. We’d then create ‘pen portraits’ of them; illustrations, names and summaries of a typical member of each segment. It let us predict with reasonable accuracy what kind of offer would appeal to them.

Niching in this scenario would be to have taken just one of those customer segments and focusing the whole organisation on it. Effectively abandoning the rest.

The benefit would have been that we’d have been able to cut through in a highly competitive marketplace. We could have redesigned our brand to appeal to this niche. We’d have been ‘the obvious choice’ and if we were lucky, the ONLY provider for that type of consumer.

But the risks would’ve been huge. We’d have been cutting off the lion’s share of our revenue. So we’d better be certain that the segment we picked was highly profitable and easy to reach!

Niching is the equivalent of only aiming at the treble 20 section on the dartboard (your current target market).  It’s trickier to get but you’ll earn more points if you manage to hit it bang on every time. And that becomes easier with focus and practice… 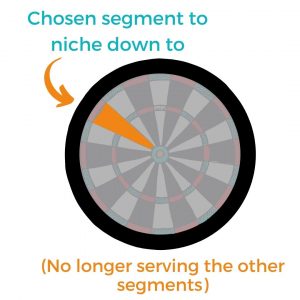 What is niching down?

Niching down as a business term means taking a narrow, precise segment from your current target market and revolving your whole business purpose around that (relatively) small group of people.

In lieu of any sensible business-related summary in the dictionary, this is my definition of a niche:

Niching is the high-risk marketing strategy of focusing all company efforts on serving only one narrow segment of your target market.

It can be a ballsy and brilliant strategy to follow. Having such a small, well defined group of people to aim at means that:

There are very few valid examples of successful niching, partly due to the fact that if a niche company grows beyond a certain point its target group can no longer be considered niche. It’s gone mainstream.

Successful niche companies often get bought up by big multinationals and they’re then considered a sub-brand. You could argue that Ben & Jerry’s ice cream had a relatively niche market before it grew and was eventually acquired by Unilever in 2001. When they first started out in the late 70’s they were aimed at ethically-minded people with wacky senses of humour who like chunks in their ice cream. And they were also geographically limited to Vermont to begin with. The brand is now most definitely mainstream and global. (And very, very delicious.)

But there is no common understanding of what limits of market size constitutes a niche.

When doing my research for this blog, I came across an article on niching in Entrepreneur that suggested that selling athletic shoes to men was a niche. I’d argue that that is a target market not a niche, and not a particularly sharply defined one at that.

Arguably even more dangerous that the online business world’s obsession with niching is the worrying trend for business to not only feel obligated to niche, but to attempt to do so by running through a rudddy ideal customer avatar exercise. GAH!!!

I tried to find out who invented the ideal customer avatar exercise but all I found was a confusing mix of blogs. Some declare that having an ICA is a must, some believe that it’s rubbish.

Allow me to de-muddy the water…

The ideal customer avatar exercise involves imagining what your absolute ideal customer is like. Where they live, what their day is like, whether they have a family etc. It blends demographics and psychographics into a personality profile. A bit like the ‘pen portrait’ I mentioned earlier. The aim is that they feel so real that you can imagine how they’d react in certain situations. Kind of like creating a character for a novel.

This character could be based on someone who’s been a real life customer of your organisation, or they could be imaginary.

In reality, the ICA exercise is fabulous when:

What it’s terrible for is trying to define the target audience for your whole business.

Does that sound ridiculous? That a business would centre all of its resources and energy around one individual description of someone who could be a figment of their imagination?

Well I’m sad to report that it is happening, simply because these three concepts are getting all muddled up together.

How to go about niching for your business

Niching has its pros and cons. Now you’re fully informed, you might want to know how to go about niching for your business.

I’ve identified two relatively safe ways to go about it:

That’s it. No weirdly specific descriptions of one individual human. No random obsession with people from one industry or with a certain personality type.

Does getting clear on what niching means even matter, Ms Pedantic?

Yes, I believe it matters a lot!

‘Niching’ now seems to be short for ‘defining your target market’. It’s because of this dual meaning that it makes it more difficult for people to make sense of it and get it right for their businesses.

The sad irony is that the people who are most likely to wrestle with the advice ‘to niche down’ are the very people who are least likely to be able to do it effectively; new businesses who don’t have big audiences or well-defined target markets yet.

Whether your company is brand new or been around for yonks, niching is absolutely optional. But what you definitely do need to do is to define your target audience.

But Janine, I already have a/ several well defined target market(s)!

If that’s the case then well done!

The next step is to protect the parameters of your target market(s) by making sure the whole of your organisation understands that that is who you’re serving. Your target market(s) becomes the yardstick for decision making. About what service offers to create. About how to price them. And how to position them as no-brainers in the eyes of your potential clients.

And don’t worry, if you want to call that defined target market a niche. I’m not going to stop you. It’s the language that we’re using nowadays. But I stand by my aspiration to get clear on what we mean when we use these words. : )

Want to join hundreds of other service-based business owners and get fab advice and tips on how to position what you do as a must-have (not just a ‘meh, I’ll think about it..)? Join the Hot list.

Which business model is best for you: one-to-one Vs group programme Vs membership Vs DIY courses